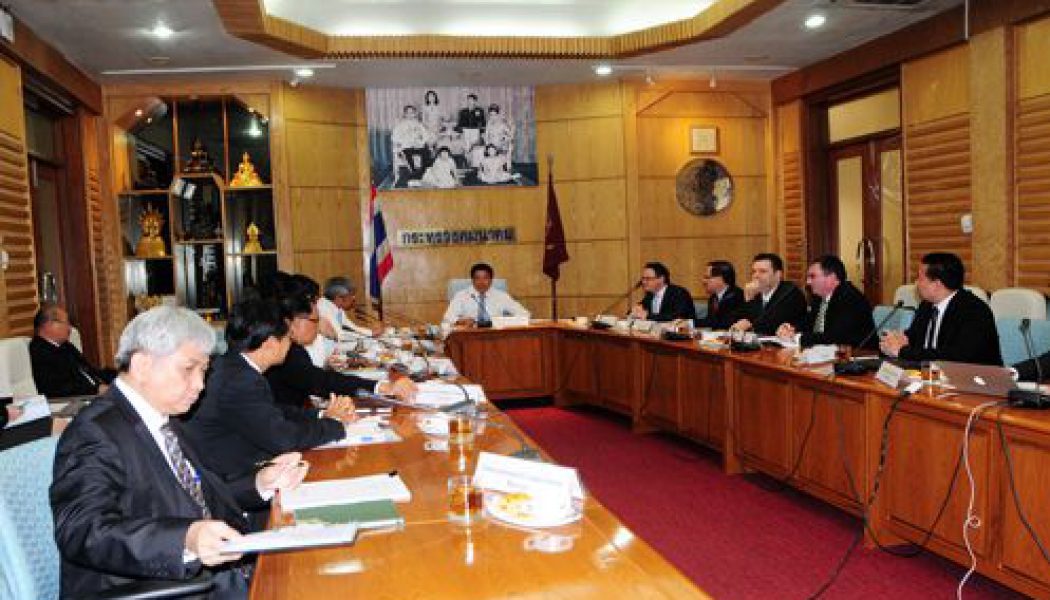 Ministry of Transportation has a policy to develop the country’s aviation industry and reduce dependence on foreign countries. The policies will help promote Thailand as a regional hub for aircraft maintenance.

The air transport industry is growing rapidly especially in Asia Pacific.  In Thailand, with a growth rate of 13.7 percent, shows incremental passenger demand for air travel due to the rapid expansion of Low Cost Airlines fostering competition in fares which allow low-income people for affordable services to travel by air. In addition, the integration of the countries in the region, the ASEAN Economic Community or AEC, by 2015 will help facilitate more movement of investment goods, services and labor within the region of Southeast Asia including open sky policy. The single aviation market will further the growth of the aviation industry and hence become much more advanced.

The aviation industry is likely to grow as well as the air transport industry. While the demand for travel increases, airliners are looking to increase the fleet to meet demand. After purchasing, it is necessary to maintain the aircraft in a readily international standard set by the Department of Civil Aviation (DCA). In the past, mainly manufacturing and aftersales services are located in North America and Europe. But such businesses are likely to expand into different regions in order to cater to the growing demand and to reduce production costs.

In Thailand, there are 49 licensees to engage in air transport business with 334 commercial aircrafts and 188 private aircrafts, which makes a total of 552 registered civilian aircrafts. One of a major cost to operate an aircraft is its maintenance and, currently, aircraft repair center in Thailand are scarce. Large operators such as Thai Airways International have their own aircraft maintenance center but also not able to accommodate the needs of other airlines adequately. Other air maintenance centers in the country are of a smaller size with a very limited capacity for maintenance of the aircraft. Hence it must be maintained or repaired in other aircraft maintenance center in other countries especially to Singapore which results in a loss of Thai economy.

Aviation’s maintenance and repair industry, as a part of the industry’s value chain, grows with respect to the air transport demand. In the year 2012, number of aircraft worldwide is approximately 20,840 and is expected to grow to a total of 29,955 aircraft in the year 2022, an increase of 3.7 percent per year while the aircraft maintenance industry worldwide was approximately 79,500. Million U.S. dollars in the year 2012 and is expected to increase to about 68,400 Million U.S. dollars by 2022, an increase of 3.3 percent per year. Asia is the region with higher growth rates than the other regions. Aircraft maintenance industry is an activity that is of complex and high technology, generally referred to as MRO (Maintenance, Repair and Overhaul), which can be divided into four main segments: Line Maintenance, Airframe and Modification, Engine Maintenance and Component Maintenance. Airlines around the globe instead of operating in aircraft maintenance in-house, many will look to the outsourcing option more as the future trend. Hence it is a prospect of the service provider in the Asia, which has strengths in lower cost with skilled workers available. Thailand has a major role in driving the ASEAN aviation single market and has been assigned, as the main coordinator of ASEAN air transportation, must take such opportunities to the benefit of the country.

TEBA met with Transport MInister Chadchart Sittipunt early February 2013 to recommned Ministry of Transportation to develop policy for the country’s aviation industry and reduce dependence on foreign countries. The policies will help promote Thailand as a regional hub for aviation. While Thailand has an advantage in terms of its geography and the supporting industries, this has provided the country with high potential which can be developed as alternatives in both manufacturing of aircraft parts and repair center in the region supporting Singapore. Target local and foreign airliners in particularly from the neighboring developing economies with potential expansion of aviation. Establishment of industrial and aviation repair center will create job creation, Technology Transfer and utilization of the other local industries, thereby stimulating the economic growth of the country in support of the liberalization of ASEAN.